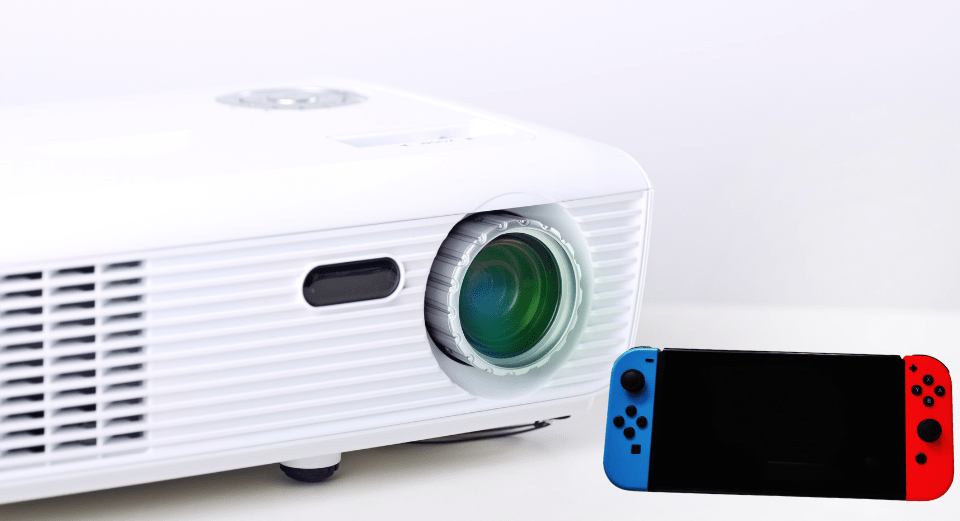 Nintendo Switch is a part of the eighth generation of game consoles. What sets it apart from the rest is its hybrid nature between a home console and portable gameplay. It was a challenging task to find one in the market until recently because of its super-fast sales. Of course, who would miss an all in one; gaming on the go and a big-screen gaming experience?

If you managed to find yourself a switch, you would probably be looking at ways on how to hook up Nintendo switch to projector. Its portable nature and flexible connectivity make it a perfect pair with a projector. Let us face it; even a 100-inch flat TV screen cannot provide an alternative to the user experience provided by a projector.

You can find many inexpensive, large display projectors in the market, providing you with the ultimate theatrical experience. A Nintendo switch paired with a projector is every gamer’s dream. If you are looking to buy the best projector for Nintendo Switch, check out our detailed guide here. Here is an easy step by step guide on how to hook up Nintendo switch to projector.

Nintendo Switch: Where It All Began

Previously Nintendo released its Wii-U, which failed big time. The reason being its shallow motion control, which was not able to support a lot of games. Furthermore, the console had limited options and a lot of technical capabilities, so it failed to attract gamers towards itself. So Nintendo came up with the Nintendo Switch, which appealed to the masses so much that people could not get it without a waiting list for a long time.

This dual, home and portable console appeal to serious as well as occasional gamers. The switch consists of all the Nintendo original games as well as third party games. This adds to the worth of the switch. Some of the most famous and masses favourite third party games include the Breath Of The Wild, Super Mario Odyssey, and Dark Souls Remastered.

Another fantastic feature that you will not find in other consoles is the region free feature. Simply put, you can access all the games you have bought from any place in the world and play them on your console regardless of the location you purchased it.

The switch gives an output of 1080p on the big display, such as a projector or a monitor. Even on tablet mode, it gives off amazing graphics at 720p resolution. It connects easily to a projector; in the same manner, it connects to an HDTV. Your projector only needs to have an HDMI port. The switching from the projector to the portable mode is brisk, which means that you do not have to worry about your game progress whenever you switch from one to another. Your game will continue from the same spot in the projector where you left it in the console.

Guide On How To Hook Up Nintendo Switch To Projector

The Nintendo Switch comes with a 6.2-inch tablet, two joy-con controllers, a joy-con grip, a TV dock, an HDMI cable, and a charger. The TV dock and HDMI cable are all you need to pair up your switch with the projector, and you are good to play.

If your projector has an HDMI port, then the process is straightforward. But if you have a vintage projector that does not have an HDMI port and supports VGA for monitors and RCA for media players, it makes it a bit complicated. We will walk you through both these scenarios.

Connecting Nintendo switch to a projector with HDMI port

You just need to turn on your projector or monitor, and your game will be displayed. The Nintendo switch exhibits a great feature that saves your progress whenever you switch from the dock to the console and vice versa.

Connecting Nintendo switch to a projector without an HDMI port

The rest of the steps are the same as with a projector with an HDMI port. You just need to take care that you get an HDMI to A/V convertor and not the opposite.

The popularity of a Nintendo switch needs no introduction. This hybrid provides endless options with its mobility and connectivity options. Whether you want to have a family game night on a large screen or play it on the road, the Nintendo switch accommodates all.

It is extremely easy to hook up Nintendo switch to projector; the HDMI cable does everything. You only have to link the dock to your projector. The absence of an HDMI port complicates matters a bit. But you only need an HDMI convertor or adopter to solve this issue and have brilliant visuals at full HD 1080p resolution.