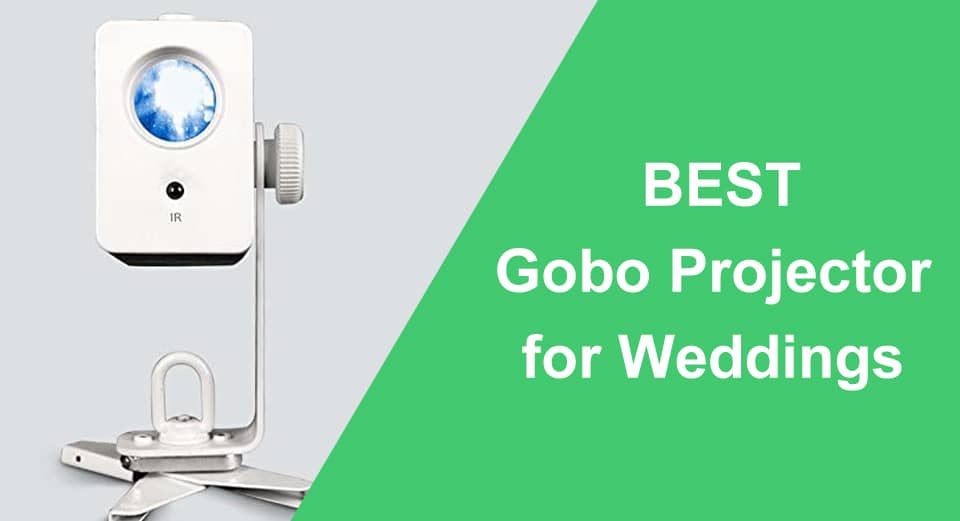 The term GOBO stands for ‘goes between optics’ and it is basically what its name says. It is a type of device made of glass or steel, placed inside of a projector which in turn produces a light projection of the image or text on the display. The gobo projectors are famous for their uses in different parties and events and they are most commonly seen at weddings. They are used to project a certain logo on the wall, display or the floor on weddings and other gathering events. You probably have seen a gobo projector before. In this article, we are going to enlist the best gobo projector for weddings. But before that, let us look into a few things.

What is exactly a gobo projector?

A gobo projector (abbreviated forgoes between optics) is a type of projector in which a piece of glass is placed which helps in the projection of the certain image present on the glass, onto a screen, wall or floor.

Can I make my own Gobo projector?

Well technically you can make a gobo projector at home as it is practically possible, but at the same time, it is a very inconvenient task. That’s why there are pre-built gobo projectors for weddings and other themed events available on amazon with tons of different options for customization which you can choose from.

Before making the decision to purchase a gobo projector for wedding, here are some of the few things you should be aware of and make your choice accordingly:

Brightness of the gobo projector

This is one of the most important factors and depends totally on where you are going to be placing and using the gobo projector. If it will be used for indoor events and weddings, then a low cost gobo projector with average brightness can easily do your task while remaining under budget. However, if the wedding is outside in the broad daylight, you’ll probably need a bright gobo projector with high lumens to be able to counter the fading caused by sunlight.

Type of the projector

There are 2 basic types of gobo projectors:

After going through various options available online for gobo wedding projectors and reviewing each one of them in detail, we filtered the crap out so you don’t have to do the hard part and made a listing for best gobo projectors for weddings. And if you want to make a quicker decision, the editor’s recommendation for you for the top gobo event projector is the CHAUVET DJ EZ GOBO Projector. For a comprehensive review including the features, check out its review below. 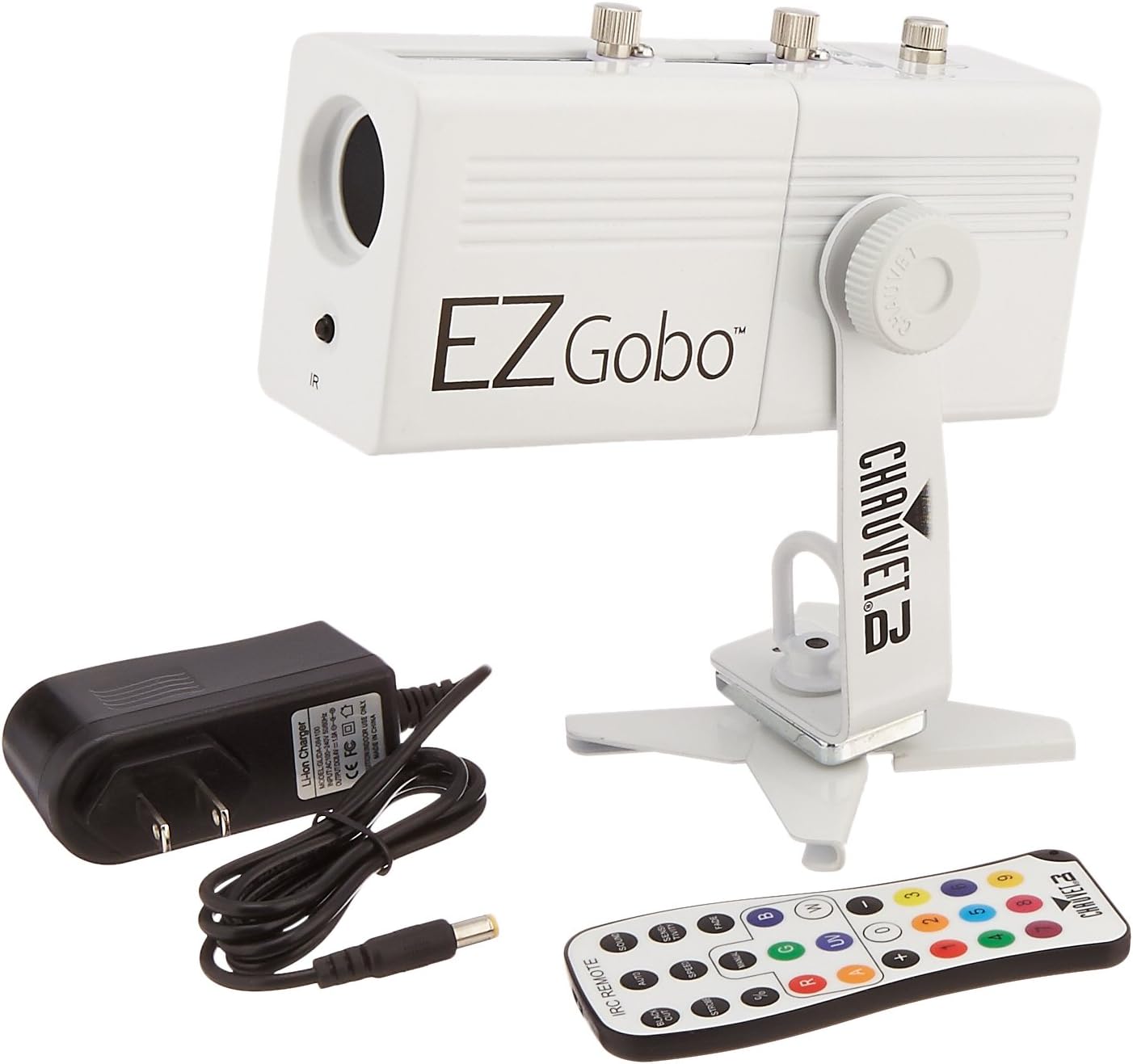 On the top of our list and the editor’s choice is the CHAUVET DJ gobo event projector. This is the best overall gobo projector for weddings and events. As the name of this gobo projector shows, this is specifically designed for DJs to light up the dance floor and keep the party moving with some great lighting of the stage and the club. Likewise, this awesome projector can also be used for weddings or any gathering events.

It is a LED gobo projector and one of the best features of this is that there some very powerful magnets installed in the base of this projector, which means that it eliminates the hassle of screwing and mounting it up in a wall or to a stand and you basically stick it to any flat metal surface in no time and it will do its job. Thus it won’t be wrong to say that it is a portable gobo projector.

Speaking of portability, this projector has a built-in battery pack which is rechargeable making it completely portable and wire-free to use and place anywhere. It also features a manual zoom which allows the projection of the image to be enlarged so you can get a short-throw as well as a long-throw projection option in the same device which makes it a usable gobo projector whether for small rooms or larger halls. 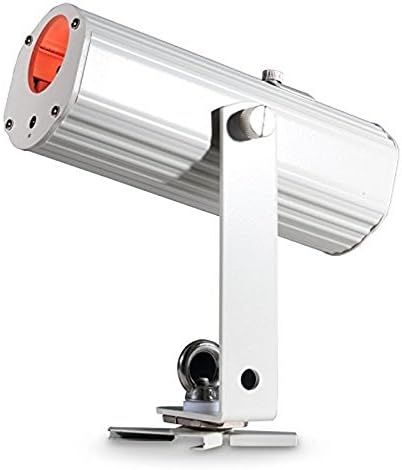 On the second place of our list for best gobos for weddings is this ADJ Pinpoint Gobo color projector. It has a 5 star review rating so far and it is the newly launched gobo projector by ADJ products. ADJ is known to deliver quality in their products and their excellent customer service.

This gobo projector is 10W powered 4 in 1 LED light projector for wedding events. Similar to our previous mention, this one also has a magnet built into its base for easier and hassle-free installation which also supports X-clip mount drop ceiling frame mounting.

It has a built-in powerful battery which makes it portable and to be placed anywhere in the wedding hall. The battery lasts for around 5 hours in normal mode and around 18 hours in energy saving mode. 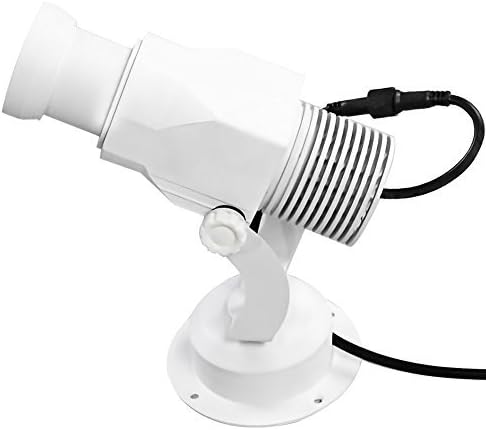 This is the compact 15-watt LED gobo projector by INSTAGOBO. Other than the Chauvet, this instagobo wedding projector’s LED chip gives you around 30,000 hours of lifespan before needing to be replaced, which you probably aren’t going to be using.

With a long life and high build quality, it is one of the most bright gobo projectors. Also, the quality of the projection is top-notch with a crispy sharp and clear HD image. We all know how most of the gobo projectors die due to constant use, but not this one as it has a very good high temperature so you can use it for extended periods of time.

The gobos which can be used in this sleek projector are made of glass and film. The same company also provides custom built multi-color plates with your own image which you want it to project. 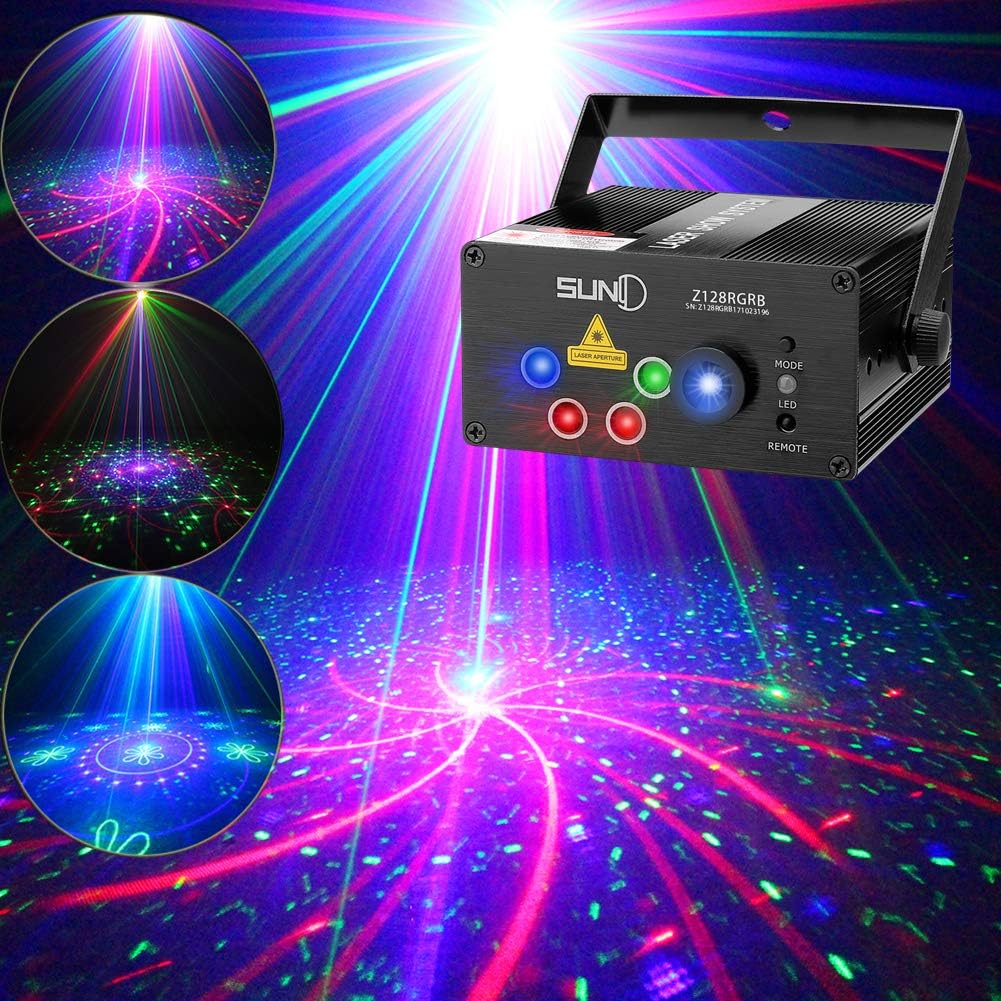 A great addition to the list of best Gobo projectors for weddings is SUNY Stage DJ Projector. As the name suggests, this projector is the perfect fit for DJs. This does not specify this projector for DJs; instead, you can use it for any purpose. It is an excellent showstopper at events and parties. It comes with a great collection of 20 Gobos and 128 fantastic combinations.

It provides amazing features with a ridiculously low price point. You will not find such worth for your money with any other projector. One great highlight of the Suny stage projector is its sound sensors, which control the lighting effects in relation to the sound. This means that your music beats are correlated with the lightings.

The projector comes with remote control, making it a convenient option. You can administer any setting, from sound to light sitting at one spot. It is compact and light in weight, so you can take it any place with you. You only have to plug it in and see the magic happening in the next few minutes. 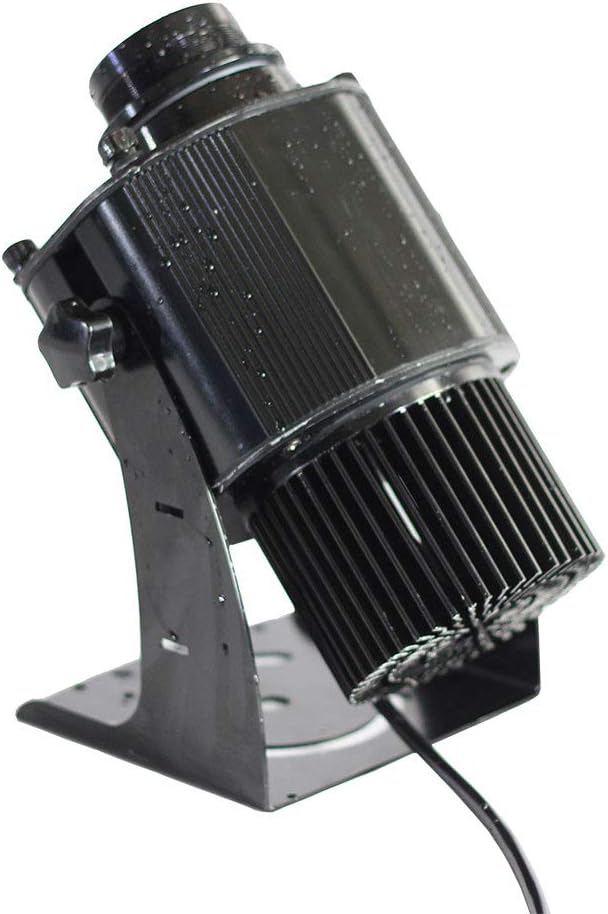 Hiliting is famous for its robust Gobo projectors. Therefore, it had to be listed among the best Gobo projectors for weddings. The body is made of aluminium, alloy metal shell making it durable and reliable. Due to this, it works great as an indoor as well as an outdoor projector. It goes an extra mile by constituting a glass Gobo, which projects even the most intricate and delicate designs.

The image quality is great, which means that you can take it to small events, club parties, and weddings. Hiliting LED logo Gobo Projector comes with an efficient cooling system keeping the device cool at all times. The IP65 resistance means that you can use it outdoors without any worries of rain or moisture.

You can customize the settings according to your ease. Whether you want it to rotate or stand still, turn the light on or off you can control it all through a click of the remote. It provides high-quality projection, that is crisp, bright, and vivid. It is easy to mount and set up. You can consider them as an all-in-one Gobo projector, containing all the specs you could wish for.

So which of the best gobo projector for weddings are you going to buy? Do you have any query? You can comment down below or contact us directly.