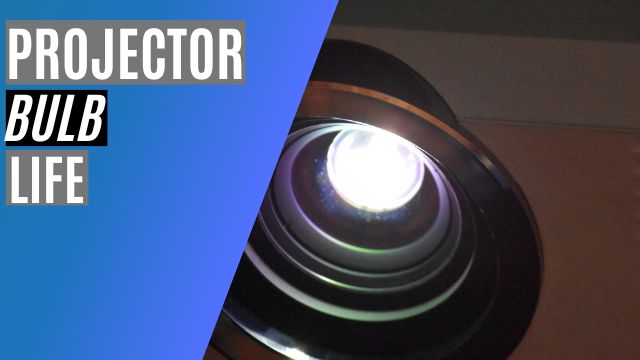 Trying to figure out how long projector bulbs last? Check out this helpful article.

But the more you use the projector bulb, the lower the lamp life gets. This means eventually, your projector lamp will dim or burn out completely. A low light output from a dim bulb means your projections aren’t clear or bright enough.

To help you manage your projector, we’re figuring out how long do projector bulbs last and the steps you can take to lengthen the lamp life.

Before we get started, we’ll show you how you can check your projector lamp’s life.

How To Check Your Projector Lamp Life

There are various methods to check your projector lamp life and most modern projectors make it even simpler. If your projector is a relatively new model, you’ll need to click on the “Information” option on the main settings page.

This menu shows the number of hours your projector bulb has been used. Some projector manufacturers also include the entire rated lamp life. This makes it easier to calculate and know when you need a replacement projector lamp.

Alternatively, some projectors also feature an indicator light to tell you when you need to change your lamps.

In most cases, you wouldn’t want your projector bulb life to reach zero.

Projector lamps calculate according to the light bulb half-life. This indicates how many hours a bulb needs to reach before it’s half as bright. If a projector is rated at a max 30,000-hour lamp life, its half-life would be 15,000 hours.

When it reaches the 15,000-hour mark, it’s time to get a replacement lamp. You could use it even when it reaches half-life, but the image quality won’t be great. The light source will dim and won’t perform the same as when it was brand new.

This is especially bad if your projector is located in a room with ambient light. You won’t be able to see much on-screen, no matter if it’s home made or very expensive, as the projector lamp isn’t bright enough to counteract oncoming light.

For older models that don’t have this feature, you can try holding down the power button for 15-20 seconds. Older models usually show the used lamp life hours. If not, refer back to your projector’s user manual.

Keep in mind that projector lamps are based on a bell curve.

This means manufacturers show the most possible lifespan rather than an exact lifespan. Most projector lamps will reach the stated lifespan, but it’s possible they won’t due to abnormal usage patterns.

Figuring out how long do projector bulbs last isn’t as straightforward as comparing the number of hours on your projector and what the manufacturer stated. If you’re lucky, it’ll last longer, otherwise, it might experience a premature lamp failure.

Metal halide lamps were the most common projector bulbs starting from the 1960s but gradually lost their place in the market. New and improved innovations get you the same brightness level as metal halide lamps without the short lamp life.

Metal halide lamps use high-pressure mercury and metal halide vapor to create light through an electric arc. This creates a very bright projection but the downside is it heats up the room it’s placed in and can’t be used continuously.

And since they can get extremely hot, the projector bulb might burst if it goes through excessive temperature stress. The hotter it gets, the more the bulb will decay which could lead to shorter lamp hours and worse brightness over time.

Most projectors released in the past couple of years opt to use a UHP lamp or a variation of it.

UHP stands for Ultra-High-Performance lamps and is a type of metal halide trademarked by Philips Electronics. However, compared to older metal halide lamps, UHP lamps have a much longer lifespan.

A metal halide lamp will last 2,000 hours to 5,000 hours while a UHP lamp’s base average life spans is rated at 5,000 hours. These types of projectors also feature a lamp economy mode that lowers the brightness for longer-lasting lamp hours.

They’re also as bright as metal halide lamps, have a better heat management system and consistent color performance without hotspots. Ultra-High-Performance lamps can last up to 20,000 hours on the high-end.

UHP lamps are a standard projector lamp choice for middle-of-the-road performance in brightness and lamp life.

However, they can only be used for 3 – 5 hours at once and also heat up. They also need a startup and cooldown period when used otherwise it could lead to bulb failure.

This is because an LED lamp doesn’t use any filaments like a metal halide lamp. They’re soldered onto the circuit and have many small bulbs projecting light. LED lamps don’t get hot, don’t need to start up or cool down, and are more energy efficient.

That’s the reason the LED projector market is filled with small, portable bodies. An LED projector doesn’t require an high-end fan or cooling system like the usual home theater projectors.

However, LED projectors are sorely lacking in brightness compared to projectors using other light projection technology. DLP or LCD projectors utilize metal halide based lamps and can project even in ambient lit rooms.

Currently LED projector brightness just can’t match up to the rest of the market. You’ll need to use an LED projector in a totally dark room for the best picture quality.

The latest innovation in the projector industry is laser projectors. These projectors use laser technology as the light source instead of a bulb. This creates crystal clear projections with high contrast ratios and excellent color reproduction.

Since it’s using lasers, it’s not affected by heat like UHP lamps or halide lamps. They also don’t require a cool-down period after use. And similarly to LED projectors, laser projectors can last 30,000 hours or more depending on the model.

The big downside of laser projectors is that they’re still new so they’re very expensive. Compared to projectors with a lamp light source, they’re far too expensive for casual projector enthusiasts.

Over time we’ll see more models of the projector running a laser lighting system. But for now, we’ll have to wait until lasers become more accessible.

Halide lamps can produce up to 100 Lumens of white light per watt, making them very bright. The brighter the bulb gets, the hotter it becomes. At certain a certain heat level, the bulb will start to decay faster resulting in shorter usable lamp hours.

That’s also the reason why LED projectors can have lifespans up to 60,000 hours. They’re not as bright and don’t produce as much heat.

A high brightness projector is great, especially for ambient lit rooms. But if you don’t need the extra brightness, a 2,000 Lumens projector is sufficient while simultaneously lasting longer. Lower lifespans mean more maintenance which can cost you a pretty penny in the long run.

Modern projectors don’t need to worry as much as older models, but the theory still applies.

To help you lengthen your projector’s lifespan, here are a few tips you can follow.

5. Use The Projector Less

The less you use your projector, the longer it will last. Stick to normal operating conditions such as not using it every day. Most projectors should be used for a couple of hours at a time, a couple of days a week.

Using the projector every day for hours in one sitting is a great way for the bulb to fail altogether.

4. Don’t Run it for Extended Periods of Time

Projectors aren’t the same as TVs which you can leave on for hours at once.

They can run for quite a while, like 3-5 hour sessions but eventually, it will start overheating. You don’t want to keep it running for too long at one go as this will burn the bulb out faster. It creates excess heat, resulting in a faster lamp hours decay.

This depends on your lamp type, but it’s good advice for any kind of projector lamp.

3. Set up the Projector with Enough Space

You should keep the projector in a place with enough space.

The easiest way to do this is by having a mounted projector. Keeping a projector tucked between some books on a shelf or in your cabinet will damage the projector over time.

Since they’re producing heat, small confined spaces will block the fan which would make the projector run hotter. This can cause overheating, and eventually, damage the projector bulbs and internals like the ability to connect to Wifi.

It would also help if you kept it in a relatively dust-free environment.

Besides keeping the projector in a dust-free environment, you should also clean the projector from time to time. You’ll need to wipe the air filters and exhaust vents regularly to prevent dust buildup.

If dust is stuck to the vents, it will block heat from escaping, causing it to overheat.

All the tips we’ve mentioned are related to this; do not overheat the lamp bulb. Overheating can occur in many different scenarios like extended use, blocked vents, and high brightness settings. Try to avoid these situations as much as possible.

You can also use eco-mode on your projector to lower brightness and heat buildup.

How Much Does it Cost to Replace a Projector Bulb?

A bulb replacement can cost between $300 – $500 depending on the lamp type. There are cheaper options but they’re not reliable in the long run.

How Do You Know When To Change Projector Bulbs?

You can keep track of the used lamp hours in the Information menu or from an indicator light. You might also notice the projection light appearing dimmer.

Do Projector Bulbs Burn Out?

Yes, bulbs burn out when used too much. Since they’re generating heat, the filament will eventually fizzle away. Modern projectors don’t have this problem as much, but it can still occur over a long period of time.